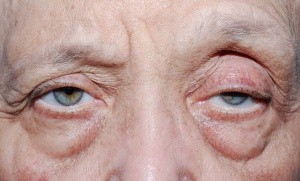 What is Ptosis (Toe-sis)?
Ptosis is drooping of the upper eyelid.  A normal eyelid height varies among the
population, but usually the upper eyelid rests at least 3 millimeters above the
center of the pupil. A small degree of ptosis may not cause symptoms, but
greater amounts can obstruct the vision and interfere with daily activities
including reading, computer use, and driving. Although ptosis can be present
from birth (congenital), most often it occurs with aging (involutional or adult
onset). It can affect one or both eyes and may be very asymmetrical. The most
common cause of adult onset ptosis is stretching or weakening of the upper
eyelid muscle (levator) that lifts the eyelid. Less common causes include muscular/neurological
diseases (myasthenia gravis), vascular diseases (stroke), tumors of the lid or
orbit and direct trauma to the eyelid.
When is ptosis of
concern?
If a droopy eyelid occurs gradually, is constant and is not associated with any other symptoms (such
as pain or redness of the eye, asymmetry of the pupils, double vision or
systemic symptoms) no immediate evaluation or treatment is necessary.  Any ptosis that is of rapid onset, is
variable or is associated with other eye or neurological symptoms needs
immediate attention.
How is ptosis
treated?
Ptosis correction is surgical. Surgery is usually performed
under local anesthesia in an outpatient surgical facility. The amount of
drooping and the degree of muscle weakness will determine the exact surgical
technique.  For small amounts or ptosis
with a relatively strong muscle, tightening of the muscle can be performed from
underneath the upper eyelid without a skin incision. More significant ptosis associated
with a weaker muscle is corrected by directly tightening the muscle through a
skin incision.  Rarely, the muscle is so
weak that no amount of tightening will be effective; in those cases the eyelid
needs to be suspended from the eyebrow with an internal suture or other
synthetic material.
Is heavy upper eyelid
skin the same as ptosis?
Dermatochalasis is excessive upper eyelid skin that often
causes symptoms similar to ptosis but is a different problem with a different
solution.  Since it is also occurs with
age, dermatochalasis can accompany true ptosis. Surgical correction requires
removal of the excess skin and can sometimes be performed at the same time as
ptosis repair.
Is ptosis surgery
covered by insurance?
Whether ptosis is considered functional and reimbursable by
insurance or purely cosmetic can often be determined by a comprehensive eye exam
along with special testing performed in the office. A visual field test is
performed to map out the amount of loss of the upper field of vision and the
eyelids are then lifted (taped) and the test is repeated.  The visual field results along with
measurements of the eyelid height will help to determine whether the surgery
will be covered by an insurance carrier.
In summary, ptosis is a relatively common aging condition of
the upper eyelid which can result in significant reduction of visual function.
Most often it is not related to a serious eye or systemic condition and can be
surgically corrected under a local anesthetic.
Post by Dr. Philip Silverstone. Dr. Silverstone is a specialist in Ophthalmic Plastic and
Reconstructive Surgery. For more information about treatment of ptosis, or any
of the services we offer, contact us at any of our 4 offices in Milford, Orange, Branford,
or Shelton.
We’re looking forward to hearing from you soon.
« PreviousNext »